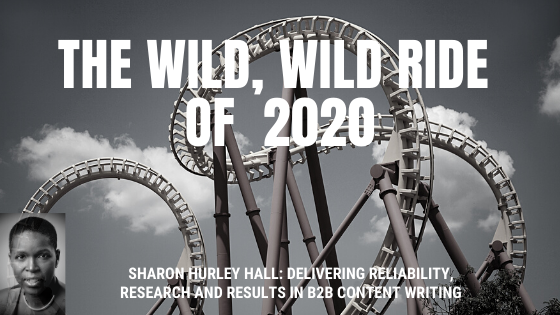 Sometimes, I don’t even know why I bother making plans.

My 2020 action list has gone out the window for various reasons, not least of them a whole bunch of Covid-19 domino effects. We’re all fine in my house, but my daughter was at school in the US, and the year’s been bracketed by getting her home safely and then getting her back safely, with the usual lockdown and quarantine stuff in between.

While all that was going on, some sure things became less sure in terms of freelance work, though I’m grateful for the clients for whom it was business as usual. You can see what I’ve been doing in my recently updated writing portfolio.  Though there were a couple of lean months, those clients kept the lights on in my house, and food on the table, which was a blessing not everyone has had in 2020.

I Now Co-Host a Podcast

Since I had a little more time on my hands, my sister and I launched a podcast, one of our long-discussed passion projects we finally were able to realize. It’s called the Introvert Sisters (no prizes for guessing what it’s about) and we’re now into Season 2 with about 20 episodes in the bag.

So far, so good, but then George Floyd was murdered (while giving many the chance to be creative, 2020 has also kept on taking). If you’re wondering why I’m talking about this on my business blog, it’s because I can’t separate my business from being a Black woman. That led me to talk openly and write more about my experiences of racism, both in the workplace and beyond.

I published a lot of those articles on Medium, and started sharing them on social media. And my sister and I also talked more about issues of race on our podcast. And the people who have read and listened have been very responsive, and happy to learn more.

But a funny thing happened (well, actually, not that funny): it turns out that some social media algorithms don’t like Black people talking about racism. It is the EASIEST way to get reported or shadow banned, and I’m not the only person experiencing it. I have thousands of followers across all of social media, but for any given piece of content, only a dozen or so will see it. And that brings me to the …

Launch of My Anti-Racism Newsletter

I launched an anti-racism newsletter. In the last few months I’ve realized a few things. First, I want to write more about anti-racism, diversity and the like. Second, I’m OVER social media platforms deciding who can see my content and who can’t.

The solution to both of those things is Sharon’s Anti-Racism Newsletter, hot off the press and hosted on Substack. Anyone who wants to read my content can subscribe to get emails (and whitelist those emails), and those who are so inclined can support my anti-racism writing with a little cash. Here’s my position piece (position poem?) on the subject of racism. It’s called I’m Still Waiting (for racism to end).

Education on the Horizon

Meanwhile, I’ve been working on anti-racism resources with Location Independent and Headstart Homeschooling (I’ll update you when they’re publicly available), and I’ve been talking about racism and diversity on podcasts, with many more to come. And I also became a mentor in Jacob McMillen’s Write Minds freelance writer mastermind group.

It’s been a wild few months, and it looks like 2020 is going to get wilder. While all this is going on, I’m co-writing an article with a fellow writer on Medium, setting up a brains trust to turn the newsletter into a community, and putting together a book of my anti-racism essays for a competition submission and 2021 publication. Oh yes, and I’m still working full time as a B2B and B2C writer.

So, what’s new with you?