How are you using social media in general and Twitter in particular? Over the years, I’ve come across: 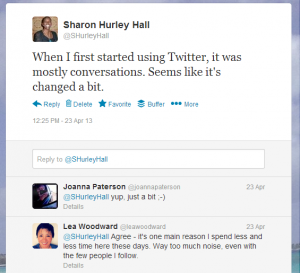 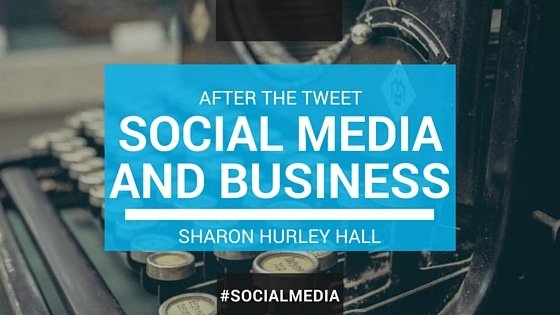 In talking to Lea Woodward and Joanna Paterson the other day, I commented: “When I first started using Twitter, it was mostly conversations. Seems like it’s changed a bit.” They agreed. Today’s Twitter stream has a lot of links and quite a few thinly disguised – or not – sales pitches. Many small biz owners take advice that says they have to be on Twitter, but sometimes that advice stops short of what to do when they get there.

And I totally get it. When you’re busy, you may not have much time for more than sharing a link and moving onto the next thing. And I know what I’m talking about, because my own Twitter journey is a perfect example.

Things are different now. For one thing, I’m doing a lot more bylined work. And these days, any professional blogger is expected to share her work via her own social media profiles (a good reason to do your best work always, I say!) Since I write a lot, I share a lot. I also share good stuff from some truly awesome people whose work I respect. And since I’m busy writing and sharing, I’m conversing less.

But if you link drop and leave, you don’t get real value from Twitter. Twitter may well work as an RSS replacement and a broadcasting tool, but if you want to truly connect with people it’s what happens after the tweet that counts.

So what exactly does happen? All three of us agreed that we were using Twitter less for conversing. Instead Twitter came into its own as a tool for taking the social temperature on a hot issue or making initial contact with someone you wanted to get to know better. Increasingly, though, all of us were interacting more in other places, such as private Facebook groups or forums built around a particular interest. There’s a lesson there, too – you may need to connect with your customers in more than one location to truly build a valuable relationship.

I haven’t written Twitter off as a conversational medium altogether – after all we WERE able to use it to have this conversation, but you only get out of it what you put in. That’s why I’ll be experimenting with:

How to Be Social

You see, if you are going to build a good online relationship with someone, it takes more than a couple of tweets and a few links. Writing and sharing great stuff is good (and I can help with the writing if it’s not your strong point) but you also have to

Most of all, you need to build interaction and trust before you market and sell.

I tell all my clients that to use social media properly you have to be social – what are you going to do after that first tweet?

18 thoughts on “Social Media and Your Business – What Happens After the Tweet?”