This month’s Word Carnival is all on the subject of website mistakes. But as a writer, I’m going to take a different tack and discuss what happens when you’re ready to promote your shiny new website with a guest blogging campaign. I’ve received lots of guest post pitches on my other blog, and have talked to lots of small business owners. That’s why I know there are lots of ways to get it wrong. By the end of this post, you should be able to avoid the worst mistakes so that you can promote your website successfully. 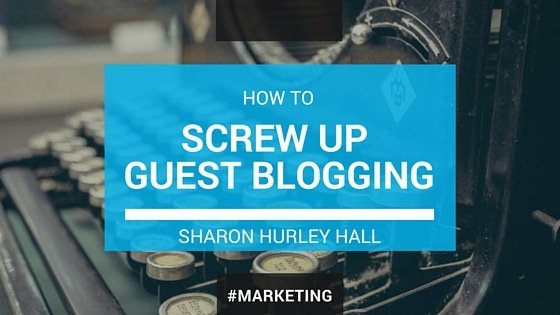 I’ve divided the typical guest posting campaign into three stages which I call Prep, Post and Pursue (hey, I needed a third P). All the examples are based on actual guest post pitches I’ve received.

At the prep stage, you are wooing the bloggers who you hope will publish your posts. A lot of the worst mistakes happen at this time. Some of the approaches I’ve received make me wonder whether the companies themselves are actually running the campaign or whether the person who approached me is at the end of a long, long outsourcing chain.

Make those mistakes and your guest post campaign will be dead in the water before it gets started. But there’s more. Another batch of errors undervalue the blog owners, assuming that the person providing the content is doing the blog owner a favor, when really it’s the other way round. While it’s true that bloggers always need new content, mostly they are not so desperate that they will publish any old thing. And they definitely want to know the credentials of the person who is writing the content.

If these are missing, blog owners know they are not dealing with a bona fide author and may reject the post. And on the last point, it’s worth noting that where those examples appear is as important as the examples themselves. If other reputable bloggers have published the writer’s work, then that’s a major trust signal.

The Body of the Pitch

If a potential guest poster manages the right greeting and has appropriate credentials, then I’ll look at the body of the pitch. Believe it or not, there are a few errors I’ve seen here too:

Assuming guest posters get to the point where I accept the pitch, the next set of mistakes provide additional grounds for rejection.

Then there’s the writing itself. Some guest posts suffer from:

There’s nothing wrong with building links to your site via guest posting as long as you do it right. Here are some of the mistakes potential guest posters make:

A badly written post or a post with any of those errors will make it that much harder to get your post published next time. That’s one reason why it makes sense to hire a professional blogger to write the posts for your guest blogging campaign if you want to get content that will enhance your reputation.

If you manage to get your guest post published then there are still a few more things to do if you’re looking to build a relationship with a particular blogger rather than post and run. Every blogger appreciates a bit of reciprocity so if a blog owner publishes your post it’s only polite to share the post via your own social media accounts.

And it’s even more important to show up and respond to comments on the post. If you don’t, it’s the final signal to the blog owner that you see this as a one way relationship and you won’t get a post published on that blog ever again.

If the people running your guest posting campaign make errors like these, then your campaign is doomed to failure. In fact, it’s why many bloggers – myself included – have stopped accepting guest posts. Life’s to short to wade through dozens of unsuitable pitches every day.

Don’t despair though; there is always room for original, well written content – you just have to make sure that that’s what you’re using for your guest posting campaign.

For businesses of all sizes and stripes an online presence is a powerful marketing tool, but simply tacking a site on to your otherwise bullet-proof biz plan isn’t all there is to it. Our roundup of small business bloggers tackle the best ways to screw up your business by screwing up your website.

24 thoughts on “Promoting Your Website? How to Screw Up Your Guest Blogging Campaign”