In the months since I reviewed Google Voice Typing Google has gone out of its way to remove some of the differences between the web app and Dragon NaturallySpeaking. In the last few weeks they have added and improved formatting abilities. But even though these are useful that’s not what this article is about. This is about using Dragon Professional Individual as a dictation tool. 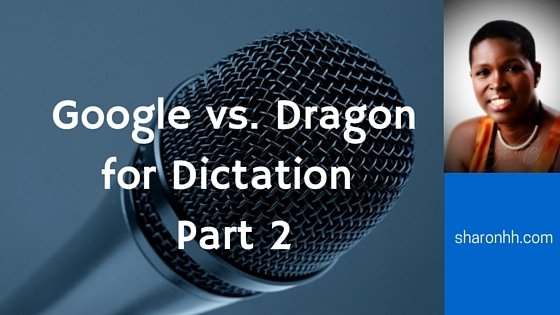 I’ve reviewed Dragon several times before and am now using what is effectively version 14. This version promises to be quicker than ever at voice recognition and more accurate than ever. How did I find it in practice?

For me, it has lived up to expectations. I’ve been using it a few times a week since October/November time and I have enjoyed many of the benefits of previous versions but with one major advantage. This version has taken less time than any other to train to my voice.

If you’ve used Dragon before you know that there’s a brief setup process where you ensure that your audio is working well. In older versions of Dragon after you had finished setting up your microphone you still had to train the software for 20 to 30 minutes. But with this addition, the minute the microphone setup was done (which took only a couple of minutes) Dragon was ready to go.

Even more impressive is the fact that it makes very few mistakes. Sure, there is the occasional word it doesn’t recognize correctly. However, Dragon is very good at working out context (though arguably not quite as good as Google) and therefore it generally chooses the correct spelling first time or offers you the right option when you are ready to correct. However Google, which has years of search data, is even more accurate in its suggestions. In this particular case, I would say that it’s a tie.

One of the things I like best about Dragon is that I can use it for almost anything on my computer. I don’t do this often, but in the past when tendinitis problems have been particularly acute, I have been able to browse the web successfully by dictating web addresses and using numbers overlaid on web links for navigating around pages. That’s something I can’t do with Google voice typing.

I’m also able to use Dragon to dictate into any program either natively (for example, in Microsoft Word) or via the dictation box, which is what I use to dictate text into Scrivener.

One big advantage of Dragon NaturallySpeaking is that it is trainable. That means that if you have a word that it consistently fails to recognize you can use the training feature to dictate this word so that it recognizes your pronunciation. Admittedly, this is more successful in some cases than in others. I have been able to get it, finally in this latest version, to correctly spell “SEO”. However, Dragon steadfastly refuses to distinguish between “see” and “say” when I’m dictating a sentence. (Of course, on this occasion, it got it right!)

Dragon also allows you to import recordings from external sources and to play back your writing so you can hear how it sounds. This is a valuable editing tool. And though I haven’t tested it myself, Dragon now also recognizes text from other users provided you have an audio clip for it to learn from. This allows you to transcribe audio, for example when you conduct interviews. Again, this is an extremely useful tool for writers.

One of the things I like about this version of Dragon which started with the previous version is that the DragonBar now collapses to a small microphone icon unless you hover over it to get to another feature. This is a big improvement over the old style bar which used to hide quite a bit of your screen.

The bottom line of my comparative review is that I will be continuing to use Dragon Professional Individual for most of my dictation work. However, with the improvements in Google voice typing, that web application is now a useful alternative for the times when Dragon is not available.

Have you tried using these two pieces of software? What was your experience with them?

* This article is as dictated, except for the three words in bold, which Dragon got wrong first time. I have also added a couple of subheadings.