This isn’t the story I had planned to tell. But then my computer died. It was a tragedy, but only a partial one. And it occurred to me that it would be a good way to give you a behind-the-scenes peek at my writing business. I’ve talked before about my favorite tools, but what does that mean when something like this happens? 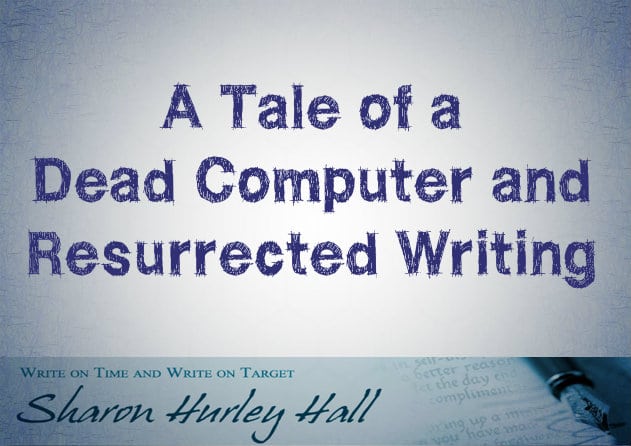 It’s not the first time I’ve had a computer die. And sadly, it probably won’t be the last, because they just don’t make them like they used to. As usual, there was no warning (well, unless you count failing to restart, failing to load Windows and failing to show anything on the screen). The computer chugged along for a little while till those intermittent failures became permanent. That was yesterday.

While I should have been meeting deadlines, I was out checking out computers and figuring out how quickly I could get a new one. (As it turned out, today is looking good). But then it was back to my work. And that’s where some of the behind the scenes magic did its thing.

I have a netbook. Once the bees’ knees, it’s now very, very sluggish. It’s running Windows XP in an online world optimized for Windows 8. That means there’s a limit to what I can do with it. One thing I can do, is write. Of course, I can’t use Dragon Naturally Speaking and Scrivener. but I’ve been able to access my files and continue to work on them. Because, technology failures or not, I’m committed to delivering work on time.

That’s why I went to Dropbox and accessed my last Scrivener backup (boy, did cloud backup turn out to be a smart decision), then downloaded it to the netbook. I spent a while wading through the files (Scrivener only gives them numbers, which isn’t helpful, and the search on Windows XP only does filenames not file contents). Eventually, I found the most urgent piece of work, copied it to Google Docs and then uploaded the finished post to WordPress.

Sure, there are some things I haven’t been able to do. The netbook has taken a dislike to Skype and I can forget about editing images. But I am able to write, so that’s what I’ve done, while making clients aware that some delay is likely. I believe in communication, and re-negotiating a deadline because of force majeure isn’t the same as missing it for no reason at all.

Now, I’m just a couple of hours away (I hope) from getting my new computer, and a couple more hours away from having it set up and ready to go. In the meantime, though, thanks to my backup computer and online backup, my clients won’t suffer.

I have learned one thing, though – my next backup computer won’t be a netbook. It will be a laptop capable of running Scrivener, Dragon and Chrome at the same time. I’ve already got a lead on the model!

Update: My local computer firm got my new computer ready in less than 48 hours, and they installed Chrome and transferred my files too. Excellent service!